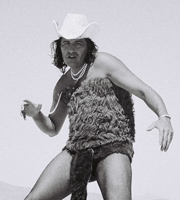 Adrian Stimson, a Two-Spirit artist, was born in 1964 in Sault Ste. Marie, Ontario. He is a member of the Siksika Nation (Blackfoot Reserve, Alberta), and was raised there. He served as tribal councilor for eight years in the 1990s, leaving afterwards to pursue art in 1999. Stimson studied at the Alberta College of Art and Design in Calgary, Alberta and received his Bachelor of Fine Arts in 2003. He has since completed a Master of Fine Arts at the University of Saskatchewan in Saskatoon.

Stimson uses in his art a variety of media incorporating themes of history, gender, and identity. His “Buffalo Boy” performance uses satire to critique stereotypes about Aboriginal people, his installation “Old Sun” explores the legacy of the residential school system, while his “Transformation” exhibit of paintings examines the subject of missing Aboriginal women. Many of his works have been exhibited throughout Canada, and he is particularly known for his “tar and feather” series.

Bison often appears in Stimson’s work: “I use the bison as a symbol representing the destruction of the Aboriginal way of life, but it also represents survival and cultural regeneration. The bison is central and very important to all Blackfoot. The bison is also considered as an icon, a food source, as well as the whole history of its disappearance; it is very much a part of my contemporary life” (Canadian Art Magazine, 2007).

Stimson has received honors and awards, including the Queen Elizabeth II Golden Jubilee Medal (2003), the Alberta Centennial Medal (2005), and the Blackfoot Visual Arts Award (2009). In 2006, Stimson served as artist-in-residence at the Mendel Art Gallery (Saskatoon). In 2010, he was selected to travel to Afghanistan as part of the Canadian Forces Artists program and lastly, in 2018, Stimson received the Governor General’s Award in Visual and Media Arts.

THE TWO-SPIRITS OF THE FIRST NATIONS