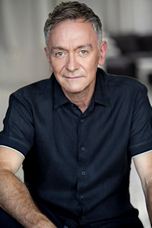 Michel Marc Bouchard s a Quebec playwright and screenwriter whose most striking works have a strong gay theme. Among the most famous are Les Feluettes (Lilies) (1987), whose original typescript will be part of the exhibition, Les Muses orphelines (1988) and L’Histoire de l’oie (1989). He was born on February 2, 1958 in Quebec.

These college productions lead Michel Marc Bouchard to participate in the Printemps des Cégep, national events where the stage productions of Quebec students are presented. His plays were noticed by the journalist of the Mainmise magazine, Bruno Dostie, who then devoted three pages to him in the Revue Cégep. He obtained his bachelor’s degree in theater at the University of Ottawa in 1980 and began his career as an actor, author and host for the various French-language theaters in Ontario, including the Théâtre du Centre national des arts du Canada, Théâtre de la Vieille 17, Théâtre du Nouvel-Ontario, Théâtre-Action and the Théâtre d’la Corvée (Trillium), of which he became artistic director in the early 1990s. In 1983, he entered the Montreal scene with La contre-nature de Chrysippe Tanguay, écologiste created at the Théâtre d’Aujourd’hui.

Thus, throughout his prestigious career, Michel Marc Bouchard has received numerous prizes and awards for his various productions. 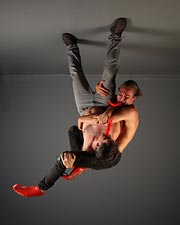 Chromogenic Curmudgeons is a duo composed of artists Evergon and Jean‑Jacques Ringuette. They jointly sign the works they create together.

Evergon explains the merger that exists between the two creators: “For years I have traveled the world researching Ramboys and Cruising Grounds or creating Homo-Baroque / Rococo works at Polaroid Studios in New York, Boston, and Frankfurt.
Three years ago my body let me down. My condition confined me to the house where my studio is also located – housebound. But in an act of challenge and remembrance, always driven by the need to create, I intensified my collaboration with Jean‑Jacques Ringuette.
From memorabilia accumulated over the years, we have produced a series of still life / landscape “painterly” photographs titled “Two Old Friends Play Chess”.
As if courting each other through art, we danced around each other, parrying each other’s blows and trumps, counter-attacking, eclipsing each other like the Queen imps – no time for a king! A dance imbued with physicality, equality, creativity and fun.
Our common work goes far beyond a simple collaboration: our works would not exist without the creative contribution of each one.
For Housebound – Portraits from the Winter Garden, we stormed window oases and portrayed some 40 houseplants, the lady-plants we confide to while watering them. They are accomplices with whom we take pleasure in gossiping about the man passing by in the street or in sharing sadness and intimacy. They are our mothers, grandmothers and best friends. Jean-Jacques would insist that they are also his fathers, grandfathers and best friends. Our winter garden unfolds like a place of complicity, humor and sometimes melancholy for our old loves.
All these works are part of the private space, that of the home, as well as that of memory and interior life”.

Jean-Paul Daoust is a Quebec poet and essayist who has published some thirty collections of poetry and two novels since 1976. Les Cendres bleues (1993), Le Vitrail brisé (2009) and Rituels d’Amérique (2013) are a few titles including which were awarded prizes. 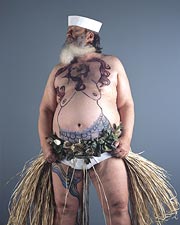 Evergon (AKA Cellulose Everegonni, Eve R. Gonzales, Egon Brut and Big Hellion), internationally renowned Canadian artist, photographer and teacher, is a true cultural icon. A pioneer of contemporary homoerotic art and an emblematic figure of homosexual communities in North America, he works in cultural circles through his active defense of homosexual rights. He questions society, its normativity and its tendency to impose a dominant sexual identity.
Throughout his career, Evergon has never ceased to challenge preconceptions of “the norm.” Through his strong commitment to sexual diversity, especially that of homosexuality, he makes us see the realities of our world. He offers representations of sexual games through naughty, sometimes dreamlike, sometimes brutal through the power of photography. In its large formats, Evergon’s photographs have unmistakable theatrical qualities. Created by the effects of light, costumes, models and accessories, they are real Renaissance or Baroque-inspired scenes. His work moves away from the documentary dimension often associated with the medium of photography.
In 1987, the National Gallery of Canada presented and circulated nationally and internationally a major retrospective of his works entitled Evergon 1971-1987. In 2017, he was part of the exhibitions Le temps file at the Musée national des beaux-arts du Québec and Photography in Canada 1960-2000 at the National Gallery of Canada.
With a Masters of Fine Arts from the Rochester Institute of Technology (1974), he began his career by reactivating outdated techniques such as cyanotype, Polaroid and holography. Today he focuses on processes related to digital photography. Several of his works have been acquired by major museums in Quebec, Canada and abroad, indicating the undeniable success of his approach, going well beyond the gay community.
Evergon also works in a duo with artist Jean-Jacques Ringuette under the name CHROMOGENIC CURMUNDGEONS. 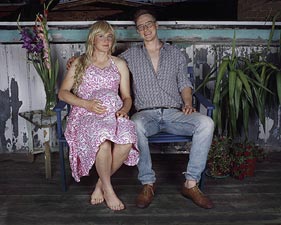 JJ Levine is a Montreal artist who creates intimate portraits. Known primarily for his Queer Portraits, Alone Time and Switch series, Levine’s works explore gender identity, sexuality, self-identity and queer spaces. He was the recipient of numerous awards and received several grants from the Conseil des arts et des lettres du Québec and the Canada Council for the Arts. 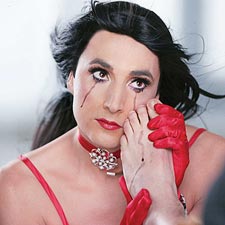 Kent Monkman is a Cree artist who uses a variety of techniques including painting, printmaking, film and video, performance and installation. His works are a balanced blend of traditional First Nations heritage and contemporary society, and feature historical reinterpretations evoking biblical episodes or events from First Nations history and often imbued with homosexual imagery and a hint of provocation. With his innovative and impactful style, Kent Monkman has become one of the most influential artists of his generation.

Lez Spread The Word (LSTW) is an organization that brings together, informs and reaches out to lesbian communities in Quebec, Canada and around the world. The organization responds to a well-felt need within the lesbian community. In addition to the website, LSTW stands out for its events and for the production of the FÉMININ/FÉMININ web series, directed by Chloé Robichaud, nominated at the Cannes Film Festival for her film Sarah préfère la course. 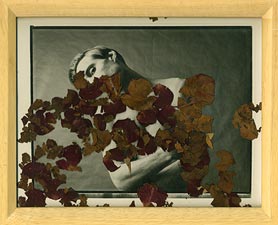 Jean-Jacques Ringuette is a Quebec artist whose work, marked by the tension between realism and artifice, irony and tragedy, regularly takes the body (or its evocation) as its main motif and revolves around the notion of incarnation, in the broad sense of manifestation of the various states and attitudes that the psyche adopts in its relationship to the flesh and the world. His works have been presented in Europe, the United States, Quebec and Canada.
https://www.jeanjacquesringuette.com 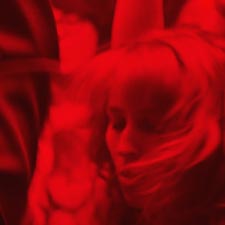 Chloé Robichaud is both director and screenwriter. Her first film, Sarah préfère la course, released in 2012, was selected in two categories at the 2013 Cannes Film Festival and enjoyed international success. That same year, she began writing and directing FÉMININ/FÉMININ. Success is once again at the rendezvous as several Gémeaux awards have been won by the team. The second season is currently filming. 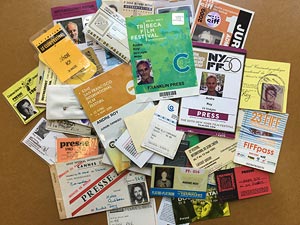 André Roy is a poet, author of essays on cinema and literature. His work is mainly made up of four poetic cycles, Les passions, Nuits, L’accélérateur d’intensité and Vies, which have earned him prestigious awards. A professor at the university and college levels, André Roy has given several lectures and readings, both in North America and in Europe. He has also worked in the publishing industry for many years. 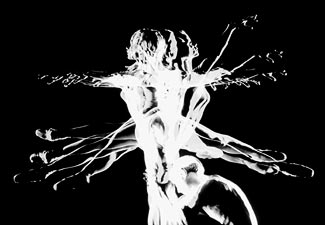 Vincent Warren is a dancer, pedagogue, American dance historian. Invited to Montreal by Ludmilla Chiriaeff, it was in 1961 that his long career with the Grands Ballets Canadiens (GBC) began. He retired in 1979 after performing major roles in the classical repertoire as well as more contemporary works, including those by Balanchine, Béjart and Taylor, and GBC choreographers Fernand Nault and Brian Macdonald. 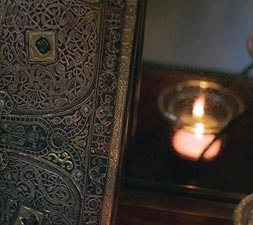 Oz Yilmaz is a Canadian film producer, photographer, screenwriter, poet and actor. Interested in the work of artists and in art, he has produced several films and artistic projects, including Portragram screened in 2016 at the Centre Phi and Kooples, also produced in 2016 and some of which will be shown during the exhibition.

Arc-en-ciel d’Afrique (AECA) is a non-profit organization founded in November 2004. Its main mission is to make Quebec society aware of the realities of LGBTQ people from Africa and the Caribbean, and to fight homophobia, especially within black communities.

Created in 1983 on the initiative of two visionaries, Ross Higgins and Jacques Prince, the non-profit community organization Les Archives gaies du Québec (AGQ) has the mandate to receive, manage and preserve any document – handwritten, printed, visual or sound – and any object testifying to the history of LGBTQ+ communities.

La Fondation Émergence‘s mission is to educate, inform and raise awareness about the realities of gay, lesbian, bisexual and trans (LGBT) people. It aims in particular to combat homophobia, discrimination and prejudice against LGBT people, to ensure legal and social equality for LGBT people and to promote the inclusion of LGBT people in society, regardless of their origins.
fondationemergence.org

GRIS-Montréal is a non-profit organization created in 1994 whose mission is to promote a better understanding of homosexual and bisexual realities and to facilitate the integration of gays, lesbians and bisexuals into society. Demystifying homosexuality and bisexuality through the testimonial method represents the main means of action of this organization.
gris.ca

La Fondation Jasmin-Roy‘s mission is to fight discrimination, bullying and violence against LGBTQ youth in schools at the elementary and secondary levels.
fondationjasminroy.com

RÉZO is a non-profit community organization in Montreal created in 1991. One of its missions is to develop and coordinate education and prevention activities for HIV-AIDS and other STBBIs in a context of promoting sexual health among gay, bisexual, cisgender and transgender men and those who have sex with other men. 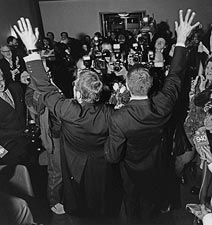 Michael Hendricks and René LeBoeuf are known today for the incredible legal battle they waged to defend gay rights in Canada and for being the first Canadian gay couple to marry. It was in 1996, after more than 20 years of living together, that Michael and René decided to take the conventional steps to unite legally. Gay marriage was not yet authorized in Canada, so the couple had to resolve to sue the government of Quebec in 2001 based on the Charter of Rights and Freedoms. The judgment ruled in favor of the couple and authorized the Canadian civil union of same-sex couples on June 7, 2002. After several appeals, Michael Hendricks and René LeBoeuf were finally able to get married on April 1, 2004 at the Palais de Justice in Montreal. in front of the clerk Francine Turcotte. Visitors will be able to discover the official document of the first homosexual civil marriage in Quebec, between Michael Hendricks and René LeBoeuf. 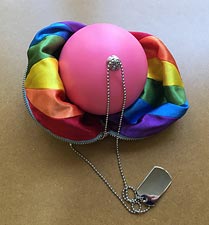 While working in civil service as a senior executive, Laurent McCutcheon directed and was spokesperson for the Quebec organization Gai Écoute from 1982 to 2013. He also created the Fondation Émergence, whose mission is to raise awareness of the audience to LGBT realities. Laurent McCutcheon’s work is recognized worldwide in the fight against homophobia. He received the Prix de la Justice du Québec in 2010.

The Research Chair on Homophobia (UQÀM), directed by Line Chamberland, brings together government, community and university partners wishing to contribute to the recognition of the realities of sexual minorities by deepening knowledge about them and mobilizing the knowledge acquired in the development, implementation and evaluation of programs and measures to combat homophobia.