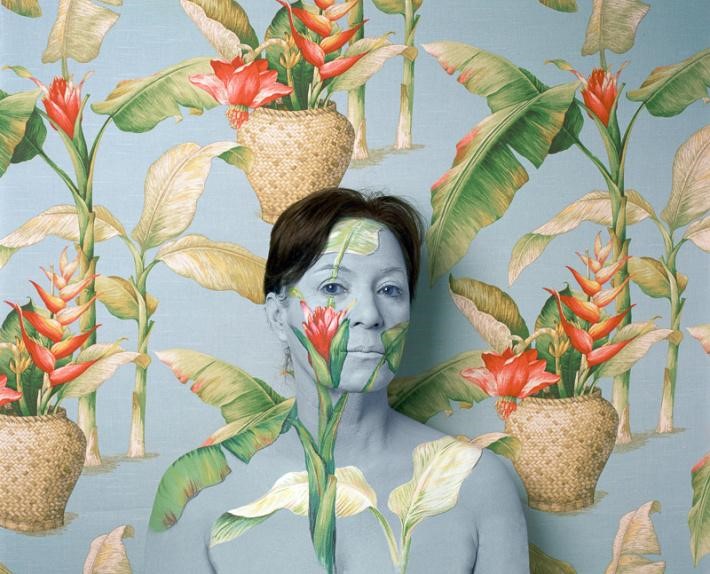 In 1968, general Juan Velasco orchestrated a coup d’etat to establish a so-called “revolutionary” government in Peru. It was in such a political and social context of restriction of civil liberties in the 1970s that Cecilia Paredes began her studies. She quickly engaged in an intense political activism which forced her into exile. First settled in Mexico, it was in Costa Rica that Cecilia Paredes took up residence for 25 years. Currently, the artist lives and works in Philadelphia, United States. Forced into a life of exile, Cecilia Paredes tells, in her work, a story marked by her displacement and relocations.

Her project Paisajes (Landscapes), initiated in 2004, is what Cecilia Paredes calls a photo-performance, a performance requiring the use of different modes of expression and whose act is “recorded” by photography. The photo is an integral part of the performance in the sense that it is thought out and integrated into the conception of the project. The artist paints her body to stage herself in front of wallpapers inspired by the plant, animal, and mythological worlds. By doing this, she seeks to create anthropomorphic images and to merge with nature.

“I wrap, cover or paint my body with the same pattern as the material and represent myself as part of this landscape. Through this act, I am working on the theme of creating my own identity with the environment or a part of the world where I feel at home.” 1

The choice of wallpaper in this performance is not trivial; it’s a source of inspiration for Cecilia Paredes. This intimist nature element hides a certain sadness or nostalgia. The wallpapers used by Cecilia Paredes allow her to cross the border between dream, memory, or reality and link them to a “ready-made” interior. This idea of interior refers to a house, a home, and creates a parallel with herself, her intimacy. This quest for a place to appropriate illustrates the artist’s reality shaped by localization and re-localization. Migration, as the central theme of the Paisajes series, is expressed by Cecilia Paredes through an anthropological approach (cultural) and an anthropomorphic aspect (natural).

“And when I came to live in Philadelphia, I started the Paisajes series in which I tell about relocations, what I miss, what is new and how I fit into my new surroundings. In this sense, it is the result of my constant nomadism that I hope to be over.” 2 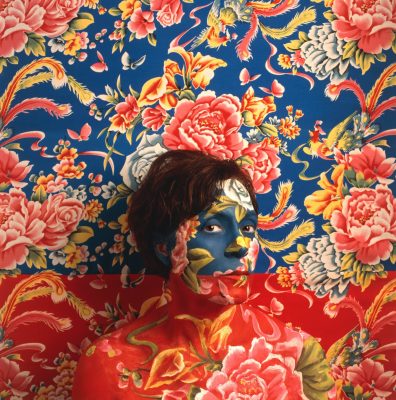 In the works of Cecilia Paredes, aesthetics is intimately linked to anthropology, that is, the study of human groups, including their belief systems, social structures, and their relationship to personality. Cecilia Paredes observes societies and human cultures in an attempt to appropriate a place, a past. This process allows her to record fragments of personal and social memory. Her work Both Worlds perfectly illustrates this idea of re-localization and appropriation of space.

“The fabric is divided into two parts, and the image of the protagonist is also divided, as if she wanted to belong to both worlds. When I refer to the two worlds, I am talking about the East and the West and also the world above and the world below, the Earth and the Underworld, belittling the whole of the crossing, nomadism and relocation.” 3

Anthropomorphic representations, that is, the attribution of human reactions to animals and things, have a prominent place in the work of Cecilia Paredes. She’s inspired by several mythologies in which there’s a close relationship between humans and their environment. A symbiosis illustrated by the representation of hybrid creatures, half-human, half-animal. Thus, the relationship between humans and nature remains strongly anchored in the artist’s imagination.

“It was in Costa Rica, where I lived for 24 years, that I was able to get really close to animals. […] I started to study them, to imitate them. Not all of them, but mostly the marginal animals with which I identify most […].” 4 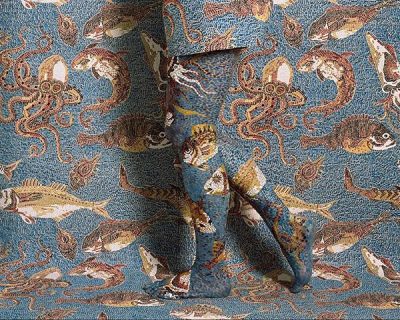 The work Calabria, produced during her stay in Italy, is a good illustration of the idea of borrowing a foreign historical narrative to script a new, more personal narrative representing her relationship with this foreign world. Cecilia Paredes used ancient iconography of Greco-Roman inspiration. Also, she emphasizes the symbolic dimension of the fish:

“To make Calabria, I chose to interpret a mosaic on fish since these mosaics come from the Hellenistic period and announce the abundance of the sea. It is also a nod to the Jewish presence in the region, for which fish is an auspice of happiness.” 5 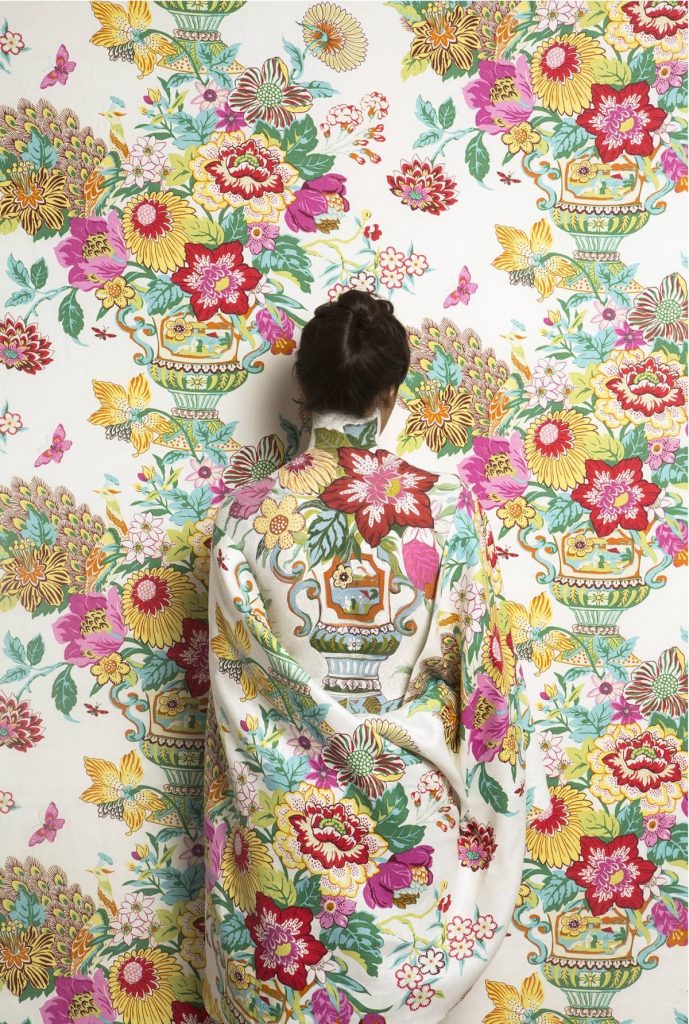 The work of Cecilia Paredes is part of an anthropological and anthropomorphic approach. The works Both Worlds and Calabria have allowed us to illustrate how, through camouflage or transformation and through the use of natural or cultural symbols, the artist constructs multiple identities. The decor, the real character of the story, seems to absorb her, to erase her identity. This approach evokes the process of voluntary assimilation of migrants to better integrate into their host society. A sort of shield to protect yourself.

This quest for identity is part of an artistic process of appropriation of a place through an interpretation of its environment and its symbols. A way of looking for oneself as a displaced individual, losing spatial and cultural landmarks. Cecilia Paredes feeds on her travels, her contacts with foreign cultures, in the hope of putting an end to an eternal nomadic life.

“Through this act, I am working on the theme of creating my own identity with my surroundings or the part of the world where I live or feel I can call home. My bio has been described as nomadic, so maybe it’s also about the need to consider the process of constant relocation.” 6

The hope of ending nomadism and the constant relocation of a migratory life is the creative engine of artist Cecilia Paredes. However, this quest for identity seems unattainable. The migrant’s home is everywhere, but they are a foreigner in their country. Their survival depends on their cultural mix. They adapt to and feed on national peculiarities. By their very existence, the migrant is the very definition of cosmopolitan.

Consult our other artists