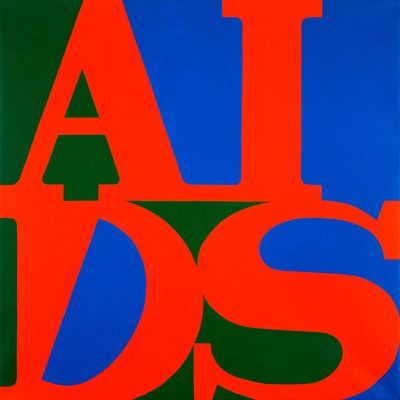 AIDS marked a significant shift in General Idea’s practice, leading to other works focused on the HIV/AIDS pandemic. The painting mimics American Pop art painter Robert Indiana’s (b. 1928) 1966 work LOVE. For General Idea LOVE exemplified the spirit of universal love, an ethos that was the foundation of the 1960’s. Indiana’s red, blue, and green rendering of the word “LOVE” became ubiquitous, appearing on goods, including key chains, cocktail napkins, and a United States postage stamp. Attracted by the fluidity of this image, which traveled internationally, General Idea made a visually similar painting, but replaced the word “LOVE” with “AIDS.” The group created this work in response to an invitation from their gallery Koury Wingate (previously International with Monument) to contribute to a June 1987 exhibition in support of the American Foundation for AIDS Research (amfAR).

“Our intention with this logo was that it would…play the part of a virus itself,” Bronson explained, “that it would spread within the culture and create a…visibility for the word ‘AIDS,’ so it couldn’t be swept under the carpet, which was…what was happening.” General Idea envisioned their AIDS logo as a larger publicity campaign that would spread awareness and combat the stigma and fear surrounding the disease. They created iterations of the logo in a range of media, including sculpture, painting, wallpaper, posters, and multiples. Public poster campaigns were initiated in cities including New York City, Toronto, Berlin, and San Francisco.

Though the 1987 painting was not poorly received, the subsequent poster version was criticized by a younger generation of AIDS activists in New York, in part, for its coded approach and for not including information on safe sex. AA Bronson later acknowledged, “It was about as bad taste as you could get at that moment to do that. That attracted us to a certain extent.” The topic of AIDS was taboo and given the context of the pandemic, General Idea’s logo was shocking in its cheerful visualization and allusions to promiscuity.

The significance and activist dimension of General Idea’s AIDS logo cannot be understated, especially during a period in which great fear and a lack of information surrounded the disease. The group’s attention to the AIDS pandemic took on more significance when Felix Partz and Jorge Zontal were diagnosed as HIV-positive in 1989 and 1990, respectively. The majority of the group’s work in the late 1980s and early 1990s addressed this issue. The group’s activity ended in 1994 due to the deaths of Zontal and Partz from AIDS-related causes.

Collection of the Museum of Modern Arts (MOMA), New York