COVID-19: THIS ACTIVITY IS POSTPONED. MORE INFORMATION TO COME.

To receive a notice when the new exhibition dates are announced: Subscribe now

In the meantime, listen to the experimental music by artist Adam Basanta below …

The Centre international d’art contemporain de Montréal (CIAC MTL) presents young Israeli-Canadian artist Adam Basanta at Espace CIAC MTL in May: All We’d Ever Need Is One Another (Trio), a fusion of intelligence artificial and artistic creation. Come and discover a real Art Factory, an artificial intelligence constantly creating, before your eyes, new works of art! Exploring the limits between humans and machines, and challenging the very notion of creation – even copyright – the artist Adam Basanta invites us to reflect on the place of AI in creation by sitting it down at the artist’s stool, a place traditionally occupied by a human …

Programming: Exhibition of works by Basanta generated by artificial intelligence, around an installation allowing visitors to observe the AI in the process of “artistic creation”. As well:

The artist is represented by Gallery Ellephant 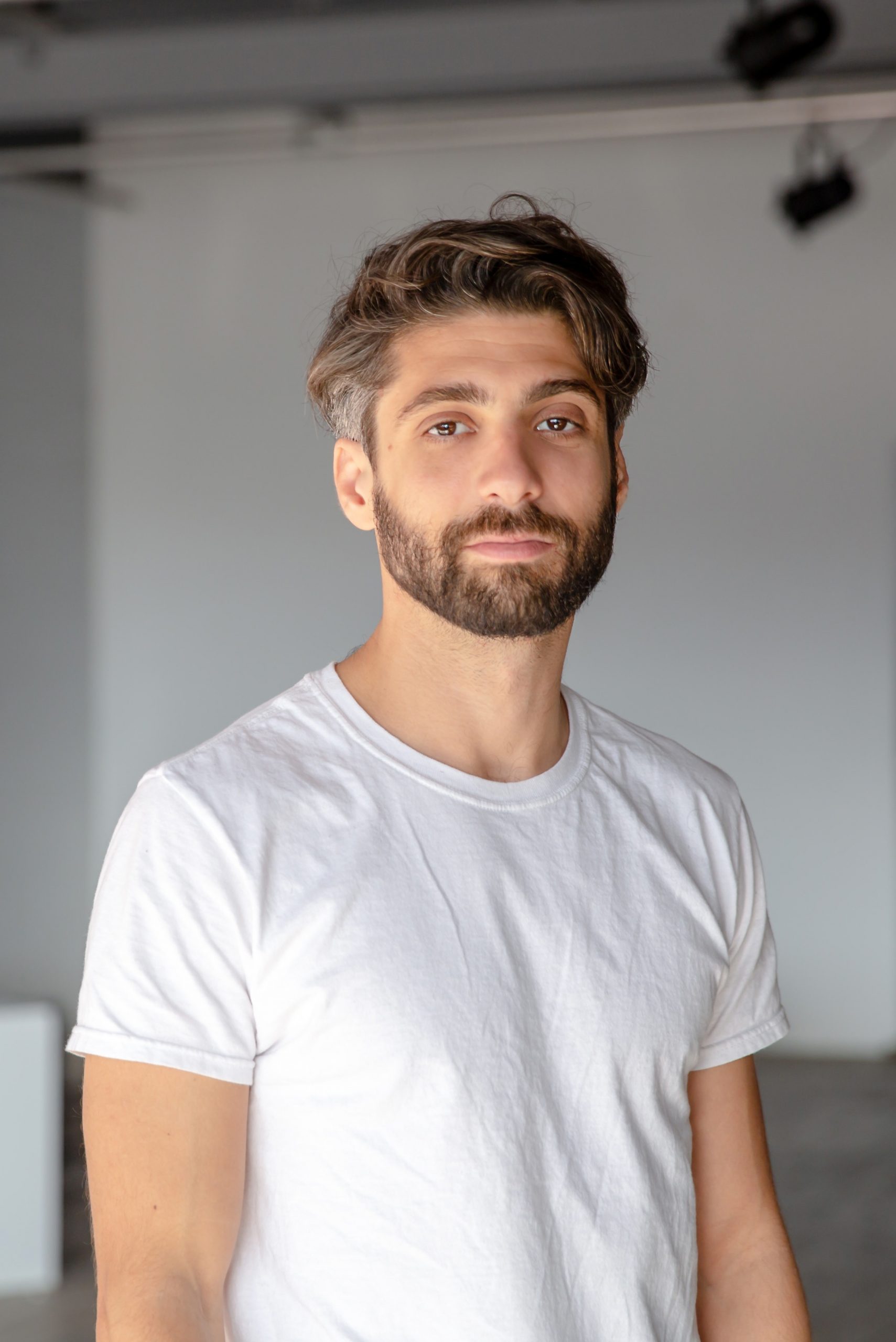 ADAM BASANTA (b. 1985) is an artist, composer, and performer of experimental music. Born in Tel-Aviv (ISR) and raised in Vancouver (CAN), he lives and works in Montreal (CAN) since 2010.

His work has been awarded several international prizes, including the Japan Media Arts Prize (2016) and the Aesthetica Art Prize (2017). In 2018 he was longlistes for the Sobey Art Award (CAN), and in 2019 he was the winner of the Prix Pierre Ayot (QC). He is currently represented by Ellephant Gallery (Montreal, CAN). His work can be found in the institutional collections of the Musée d’art contemporain de Montreal, the Musée national des beaux-arts du Québec, and the Ville de Montréal.

Remaining active as an experimental composer and performer, his concert music, live performances, and sound recordings are presented worldwide, including appearances in the MATA Festival (NYC), Gaudeamus Musicweek (NL), CTM Festival (GER), Akousma Festival (CAN), and Mutek Festival (CAN), and have been awarded multiple national and international prizes. His music has been released on Kohlenstoff Records (CAN), Farmacia901 (ITA), Important Records/Cassauna (USA), and Kasuga Records (GER).

He holds a BFA in Music composition from Simon Fraser University (Vancouver BC CAN) and an interdisciplinary Research-Creation MA in Fine Arts (Concordia University, Montreal QC CAN). 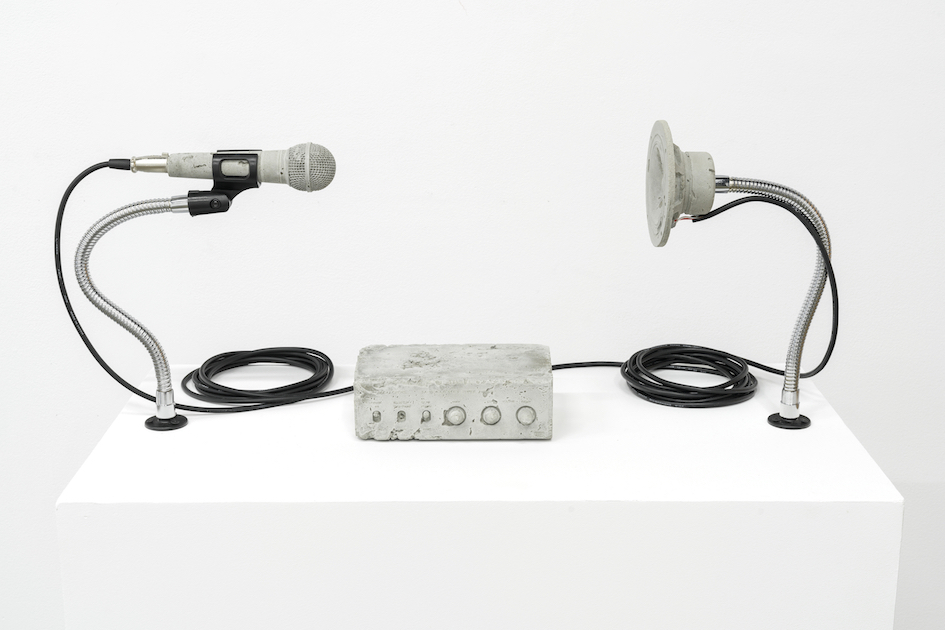 « My work explores technological practices as active, participatory, multi-sensory performances which are distributed throughout a variety of human, cultural, material and computational agencies. Through various media and techniques, I try to interrogate points of intersection between sensorial and conceptual manifestations of technology in our everyday life, revealing surprising facets of our daily intertwinement.

I employ commercial consumer technologies as my main sculptural vocabulary. By placing these objects in unconventional and absurd relationships to one another, I disrupt their ostensible technical and economic functions, transforming them into sculptural centerpieces. Through this transformation, such objects reveal their material agencies as contemporary prosthetics while simultaneously alluding to their anthropomorphic potentials.

I frequently arrange these functional readymades into reconfigured choreographic scenarios. These reconfigurations often involve a seemingly autonomous kinetic, time-based, or performative dimension. Allowing technological artifacts to act in direct relation to one another (rather than a “human user”), I aim to create spaces in which the interplay between viewer and mass produced technologies can be re-imagined, spaces in which technological artifacts function as elements in an self-sustaining ecology. »

All We’d Ever Need Is One Another (Trio)

« All We’d Ever Need is One Another (Trio) is a mixed-media installation which creates images autonomously through self-generating techniques: a continuously running “art-factory” operating independently of human input.

The installation self-generates images using three flatbed scanners laying on their side, with scanning surfaces pointing towards one another. A computer script creates automatic mouse movements, randomizing the settings of the proprietary scanning software interface, and beginning a scanning process.

Each newly created image is then analyzed by a series of deep-learning algorithms trained on a database of contemporary artworks in economic and institutional circulation. When an image matches an existing artwork beyond an 80% match, it uploads it to this website and a twitter account.

Playing on notions of technological automatisation, the agency of objects, cultural consumption, and the economics of artistic production, the installation acts as a golem-like assemblage, continuously and mindlessly self-producing without regard for human spectators. “These images I describe are created by two desktop scanners directed at each other, reading the way light hits the glass on their counterpart, the way light emanates from one to the other. The two scanners are fixed one in front of the other, but movement is built into them and reflected on them. They mirror the light conditions in the room where they are set: when you see an abstract pictogram, you could be looking at the moon. Or at the strip of light in one of the scanners. They make landscapes that meld the site and the tool.”

Continuing from the original work All We’d Ever Need Is One Another (2018, now part of the Permanent Collection of the Musée d’art contemporain de Montréal), the Trio version expands the scale and scope of the work, creating a larger variety of randomly-generated images and comparing them to an expanded institutional and commercial database. While the original version relates strongly to the practice of Modernist paintings, Trio extends itself in reference to an equally large body of work in the realm of experimental photography. »